An Autumn Reassessment – Will the fallout from China favour equities, bonds or the US Dollar?

It had been a typical summer market until the past fortnight. Major markets had been range bound, pending the widely-anticipated rate increase from the FOMC and the prospect of similar, though less assured, action from the BoE. The ECB, of course, has been preoccupied with the next Greek bailout, whilst EU politicians wrestle with the life and death implications of the migrant crisis.

What seems to have changed market sentiment was the PBoC’s decision to engineer a 3% devaluation in the value of the RMB against the US$. This move acted as a catalyst for global markets, commentators seizing on the news as evidence that the Chinese administration has lost control of its rapidly slowing economy. As to what China should do next, opinion is divided between those who think any conciliatory gesture is a sign of weakness and those who believe the administration must act swiftly and with purpose, to avoid an inexorable and potentially catastrophic deterioration in economic conditions. The PBoC reduced interest rates again on Wednesday by 25bp – 1yr Lending Rate to 4.6% and 1yr Deposit Rate to 1.75% – they also reduced the Reserve Ratio requirement from 18.5% to 18%. This is not exactly dramatic but it leaves them with the flexibility to act again should the situation worsen.

Markets, especially equities, have become more volatile. The largest bond markets have rallied as equities have fallen. This is entirely normal; that the move has occurred during August, when liquidity is low, has, perhaps, conspired to exacerbate the move – technical traders will await confirmation when new lows are seen in equity markets during normal liquidity conditions.

Has anything changed in China?

China’s economy continues to slow, a lower RMB is not unexpected but how are the major economies faring under these conditions?

US growth and lower oil prices?

I recently wrote about the US economy – US Growth and employment – can the boon of cheap energy eclipse the collapse of energy investment? My conclusion was that US stock earnings were improving. The majority of Q2 earnings reports have been released and the improvement is broad-based. This article from Pictet – US and Europe Q2 Earnings Results: positive surprises but no game changer which was published last week, looks at both the US and Europe:-

Almost all S&P500 (456) companies published their Q2 results. At the sales level, 46% of companies beat their estimates; meanwhile, the corresponding number was 54% at the net profit level. Companies beat their sales and net profit estimates by 1.2% and 2.2% respectively, thus demonstrating strong cost control. Financials were big contributors as sales and net profit surprises came out at +0.5% and 1.5% respectively excluding this sector. Banks (37% of financials) beat sales estimates by 9% sales surprises and 8.4% at the net profit level. This sector’s hit ratio was especially impressive with 92% of reporting companies ahead of the street estimates. Oil and gas companies, which suffered from very large downgrades in 2015, reported earnings in line with expectations. Sales of material-related sectors (basic resources, chemicals, construction materials) suffered from the decline in global commodity prices, but those companies were able to post better than expected net profits. While positive, these numbers were not sufficient to alter the general US earnings picture. Thus the 2015 expected growth remains anaemic at 1.6% for the whole S&P500 and at 9.1% excluding the oil sector.

Q2 GDP came out at 2.3% vs forecasts of 2.6%, nonetheless, this was robust enough to raise expectations of a September rate increase from the FOMC.

The European Q2 reporting season is still in train, however, roughly half the earnings reports have now been published; here’s Pictet’s commentary:-

A little more than half of Stoxx Europe 600 constituents published their numbers. Sales and net earnings surprises came out at 4% and 4.3% respectively. Excluding financials, the beat was less impressive with 0.8% at the sales level and 2.7% at the net income level. Banks had a strong quarter on the back of a rebound in loan volumes and improvements in some peripheral economies. This sector’s published sales and net income were thus 33% and 11% higher respectively than estimates. One of the key questions going into the earnings season was whether the very weak euro would boost European earnings. Unfortunately, this element failed to impact Q2 earning in a meaningful way. Investors counting on the weaker currency to boost European companies’ profit margins were clearly disappointed as this process remains very gradual. Thus, European corporates’ profit margins remain well below their US counterparts (11% versus 15%).

The weakness of the oil price doesn’t appear to have had a significant impact on European growth. This video from Bruegel – The impact of the oil price on the EU economy from early June, suggests that the benefit of lower energy prices may still feed through to the wider European economy, however they conclude that the weakening of prices for industrial materials supports the view that the driver of lower oil prices is a weakening in the global economy rather than the result of a positive supply shock. The views expressed by Lutz Kilian, Professor of Economics at the University of Michigan, are particularly worth considering – he sees the oil price decline as being a marginal benefit to the global economy at best.

When attempting to gain a sense of how economic conditions are changing, I find it useful to visit a country or region. The UK appears to be in reasonably rude health by this measure, however, mainland Europe has been buffeted by another Greek crisis during the last few months, so my visit to Spain, this summer, provided a useful opportunity for observation. The country seems more prosperous than last year – albeit I visited a different province – despite the lingering problems of excess debt and the overhang of housing stock. The informal economy, always more flexible than its regulated relation, seems to be thriving, but most of the seasonal workers are non-Spanish – mainly of North African descent. This suggests that the economic adjustment process has not yet run its course – unemployment benefits are still sufficiently generous to make menial work unattractive, whilst unemployment remains stubbornly high:-

Euro area youth unemployment remains stubbornly high at 22% – down from 24% in 2013 but well above the average for the period prior to the 2008 financial crisis (15%).

If structural reforms are working, Greece should be leading the adjustment process. Wages should be falling and, as the country regains competitiveness, and employment opportunities should rise:-

The chart above shows Greek vs German unemployment since the introduction of the Euro in 1999. Germany always had structurally lower unemployment and a much smaller “black economy”. During the early part of the 2000’s it suffered from a lack of competitiveness whilst other Eurozone countries benefitted from the introduction of the Euro. Between 2003 and 2005 Germany introduced the Hartz labour reforms. Whilst average earnings in Germany remained stagnant its economic competitiveness dramatically improved.

Japanese Q2 GDP was -1.6% y/y, Q1 was revised to an annualised +4.5% from 3.9% – itself a revision from 2.4%, so there may be room for some improvement in subsequent revisions. The weakness was blamed on lower exports to the US and China – despite policies designed to depreciate the JYP – and a weather related lack of domestic demand. The IMF – Conference Call from 23rd July urged greater efforts to stimulate growth by means of “third arrow” structural reform:-

In terms of the outlook for growth, we project growth at 0.8 percent in 2015 and 1.2 percent in 2016, and potential growth over the medium term under current policies we estimate to be about 0.6 percent. Although this near-term growth forecast looks modest, we would like to emphasize that it is above potential and, therefore, we think that the output gap will be closing by early 2017.

Still, we need to emphasize that the risks are on the downside, including from external developments, weaker growth in the United States and China, and global financial turbulence that could lead to safe haven appreciation of the yen, which would take the wind out of the recovery to some degree.

The key domestic risks include weaker than expected real wage growth in the short term and weak domestic demand and incomplete fiscal and structural reforms over the medium term. These scenarios could result in stagnation or stagflation and trigger a jump in JGB yields.

I want to start by reviewing the markets; here are three charts comparing equities vs 10yr government bonds – for the Eurozone I’ve used German Bunds as a surrogate:-

With the exception of the Dow – and its pattern is similar on the S&P500 – the uptrend in stocks hasn’t been broken, nonetheless, a significant stock market correction is overdue. Below is a 10 year monthly chart for the S&P500:-

Looking at the chart above, a retest of the November 2007 highs (1545) would not be unreasonable – I would certainly view this as a buying opportunity from a shorter term trading perspective. A break of the October 2014 low (1821) may presage a move towards this level, but for the moment I remain neutral. This is a change to my position earlier this year, when I had become more positive on the prospects for US stocks – earnings may have improved, but the recent price action suggests doubts are growing about the ability of US corporates to deliver sufficient multi-year growth to justify the current price-multiples in the face of potential central bank rate increases.

T-Bonds have been a short term beneficiary of “flight to quality” flows. A more gradual move lower in stocks will favour Treasuries but FOMC rate increases will lead to curve-flattening and may completely counter this effect. Should the FOMC relent – and the markets may well test their mettle – it will be a reactive, rather than a proactive move. The market will perceive the rate increases as merely postponed. Longer duration bonds will be less susceptible to the vagaries of the stock market and will offer a more attractive yield by way of recompense when a new tightening cycle begin in earnest.

Europe and Japan – stocks and bonds

Since the recent stock market decline and bond market rally are a reaction to the exogenous impact of China’s economic fortunes, I expect correlation between the major markets to increase – whither the US so goes the world.

Finally, I feel compelled to mention the recent price action of the US$ Index:- 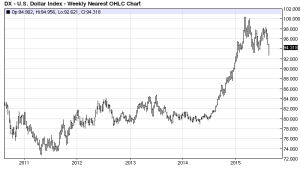 Having been the beneficiary of significant inflows over the past two years, the US$ has weakened versus its main trading partners since the beginning of 2015, however, the value of the US$ has been artificially reduced over multiple years by the pegging of emerging market currencies to the world’s reserve currency – especially the Chinese RMB. The initial reaction to the RMB devaluation on 12th August was a weakening of the US$ as “risk” trades were unwound. The market correction this week has seen a continuation of this process. Once the deleveraging and risk-off phase has run its course – which may take some weeks – fundamental factors should favour the US$. The FOMC is still more likely to raise rates before other major central banks, whilst concern about the relative fragility of the economies of emerging markets, Japan and Europe all favour a renewed strengthening of the US$.

One thought on “An Autumn Reassessment – Will the fallout from China favour equities, bonds or the US Dollar?”

In the long run