The price of crude oil has rebounded strongly since the end of January. Is this the beginning of a new trend, a short-term correction prior to a further decline or the start of a period of consolidation?

Here is the price action for March 2015 WTI futures over the last four months:-

Before jumping to any conclusions about the next trend it is worth taking a look at a longer term chart. This is the spot price chart for the period since 2005, it shows the period of the leveraged boom and the collapse during the Great Recession:- 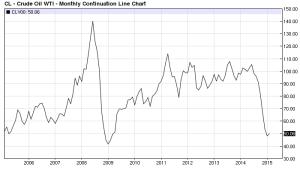 The collapse during the Great Recession was largely due to a reduction in demand as the world economy slowed dramatically. The price decline since the summer of 2014 has been driven by a combination of a delayed reaction to increased supply – specifically from the US – and a moderation in the rate of increase in demand associated with the slowing of Chinese growth and its policy of “rebalancing” towards domestic consumption. An additional factor has been the slowing of growth in Europe. An IEA report last December estimated that global oil demand had increased by only 0.75% between 2013 and 2014 – better, by 3.6%, than the 2009/2013 period but not excessive.

During 2013 and early 2014 geopolitical tension in the Middle East and Ukraine kept prices elevated amid expectations of supply disruptions. These disruptions failed to materialise. This coincided with an increase in US oil production. Finally the markets woke-up to the lack of geopolitical risk, the slowdown of growth in the EU and China, and the acceleration in US production. The price began to correct downwards taking out the 2012 lows. From here on it gathered momentum and, having taken out the majority of trading stop-losses, stabilised last month, not far from the 2009 lows.

Another look at the 10 year price chart shows the recovery in 2010/2011. At this stage the improvements in fracking and drilling technology were already becoming widely known, had it not been for geopolitical concerns the price would probably have begun to decline from this point – around $85. The widening price spread between Brent Crude and WTI shows the effect of increased US production:-

WTI begins to lag Brent Crude towards the end of 2010. Here is a chart of US versus World Oil production:-

What we have seen during the last six months is a delayed reaction to the increased supply of crude oil from the US. The recent decline has been very rapid and may have run its course, or may have further to fall. Either way, volatility is heightened and the price is likely to remain variable.

From a technical perspective I would expect the corrective rally to continue possibly to test the 2012 lows around $75/barrel. After such a rapid rise in the last few weeks, however, the price may retest the low first; there is an outside chance that the market takes out the January low to retest the 2009 bottom. The $75 level may be retested in the autumn as forward contracts expire and supply shortages appear. From this point a renewed decline is most likely, this phase will also be marked by declining volatility.

I have one concern with this technically bullish prediction – the steep contango in the futures market. At close of business on Wednesday 11th February the WTI futures settlements were as follows:-

The shape of the forward curve suggests that oil producers are not feeling quite as much pain as is implied by the spot price, the supply overhang may last into 2016.

Market views, as always, vary. At this week’s International Petroleum Week conference in London Igor Sechin – CEO of Rosneft predicted that oil prices may surge later this year due to supply shortages as a result of the precipitous decline. Meanwhile at the same conference Ian Taylor – CEO of Vitoil, questioned where oil demand would emanate from. His outlook was decidedly more bearish.

Moody’s research, published earlier this week, put a price target for 2015 is $55/barrel which makes sense if global growth slows: they see no boost to growth in China, Japan or the EU from a lower oil price but expect it to benefit India and the US.

I listened to a panel debate at the ICMA/JSDA – Japan Securities Summit on Wednesday where Takahiro Sato of the BoJ alluded to the positive impact lower oil prices might have on Japanese growth. He inferred that it would mean the BoJ undershot its inflation target. Here is a brief extract:-

On the price front, the inflation rates in major countries, including Japan, have been declining as a trend mainly due to the recent drop in crude oil prices. Under those circumstances, central banks in major countries have a common concern that major economies are trapped in a feedback-loop — the decline in the inflation rates would lead to a fall in people’s medium- to long-term inflation expectations, and it would result in a further decline in the actual inflation rates. That is why the Bank decided to expand the QQE last October.

As I cast a dissenting vote on that decision, I may not be an appropriate person to explain this policy.

The NY Times reported – KKR profits were down 89% in Q4 2014 due to turmoil in the US energy sector. New drilling has dried up in the last few months and concerns are growing about potential defaults by over-leveraged energy companies. This could slow US growth if the financial sector is wracked with contagion.

The prospects for the oil price is unclear; it will remain so for the next six months. For this reason I expect Moody’s price target of $55/barrel to be reasonably accurate even if their growth expectations prove wrong.

Obvious risk factors which could undermine my expectations include:-

I think China is more likely to surprise on the upside if it does surprise at all. The Eurozone is still a difficult situation to predict but I think the Euro currency will survive and lower oil prices will aid Germany among other countries in the Euro area. The US may be performing well economically but its appetite for foreign conflict when the country is heading towards energy independence makes little strategic sense. They are likely to deploy their resources on dealing with ISIS first.

In the long run